“Miss! Tim took my yellow chair, but I chose it first!” cried Anna, who stood from her group’s corner to explain the situation to me. Tim, red in the face, shouted back “It’s mine! I didn’t do anything!”

“That’s enough,” I said calmly yet sternly, cutting off their bickering. Tim and Anna both quieted down, staring at me with widened eyes, waiting for me to say something; everyone’s focus was on us now.

Perhaps I should use that classroom management strategy I had read? I need to nip this behaviour in the bud. I warned Tim not to fight about the reading corner chairs. Unfortunately, yellow was his favourite colour, and he wanted that one.

The thought of removing the chairs passed my mind, but the whole class, including Tim, wanted to keep them. No, I knew that I had to find another solution before it resulted in something like that; there had to be another way.

“Miss, he did take her chair. I saw it!” Two other students corroborated Anna’s story, backing her up; after hearing what they said, I turned to Tim who reluctantly admitted to taking the seat. He handed the chair back to Anna, apologised, and things settled again. Let’s call this kind of student behaviour, ‘party breakers’ there’s always at least one in each class. A party breaker is a student who cannot or in most cases, will not follow the rules, who is rebellious or lacks attention from his/her own family.

There is, of course, at least one in each class who is trying his best to entertain the rest of the students and challenge them to act the same way. No matter how much we insist on nurturing diversity, we have to agree that it represents a massive problem for most teachers.

The ultimate mistake that we can make is to take it all personally. But, we should not take a student’s mischief and non-compliance subjectively. Instead, we need to look for the right classroom management strategy that will help the student change.

We have to handle the situation in an objective manner. Remember we cannot change others, but we sure can make changes in our behaviour and attitude.

Within a few minutes, Tim began remarking loudly about what his group was doing. I reminded him about the ‘hands-up and wait’ rule, so non of us disturb the other groups; Tim apologised, and he simmered down once again. However, another few minutes passed before Tim called out, “Miss did you know that?”

“No Tim, ” I interrupted. “Remember what we talked about earlier today?” I asked with a raised brow.

I noticed that this behaviour was becoming a recurring thing with Tim; he was progressively becoming more disruptive and talkative in class.

So, I decided to experiment with some classroom management strategies I had previously used in other situations.

The emotional state of a teacher affects the whole classroom. You will do yourself and your students a favour if you enter the classroom as you enter your car.

Forget about your problems and dilemmas and focus solely on students and the teaching process. Try to be 100% present all the time, and you will see the difference. Children will feel and see your dedication. It’s a `two-way street` like in every relationship, and ‘relationship’ is vital.

This classroom management technique worked with Tim during whole-class activities. Whenever I worked with a group, he continued to interrupt.

Marbles in a Jar

I tried the old ‘Marbles in the Jar’ trick that has always worked amazing well every time an off-task behaviour occurred. I’ve used it in many different contexts, but for Tim, it didn’t. He played with them instead. He was having a ball with his mates! Not exactly my plan. Out goes another classroom management trick.

I could have stood my ground, but I needed something that would nip Tim’s behaviour in the bud so that both he and the other students could get on with learning and not be disturbed every few minutes.

Something that always gives results no matter how big a problem with the discipline of a specific student, is eye contact. When you look them in the eye with no judgment but a request, they tend to change their behaviour.

Or when you genuinely listen to what they have to say it impacts on them to reconsider their actions. We all need a human touch. What you give you get.

Eye contact certainly worked with Tim; it always stopped him in his tracks immediately. He was immediately sorry after but it didn’t stop the talking during group work. You could say sit him on his own and not let him participate, but just because he was a student with ASD (Autism spectrum disorder) did not mean he should be punished.

I also tried ‘The HEAR strategy.’

I took the time to teach Tim this 4 step classroom management strategy called ‘HEAR’. It’s discussed by Donna Wilson and Marcus Conyers in their article, ‘Training the Brain to Listen: A Practical Strategy for Student Learning and Classroom Management’.

The student learns these four steps: halt, engage, anticipate, and replay. In short: stop what you’re doing, turn to your teacher, look expectantly at your teacher, and think about what he/she is saying.

The HEAR strategy helped Tim to understand how to listen most of the time. The only time it didn’t work was when I was in deep work with another group. Once he was out of my vision for a short time, he couldn’t stop talking to his group. His talking was loud and disturbed the rest of the class. So, what to do?

Is there NO classroom management strategy that will work?

The well-known question we all ask when we enter the staffroom after we’ve had a class where a misbehaving student who doesn’t want to listen to our instructions has undermined all our efforts to stop off-task behaviour.

Yes, we have read all those books on pedagogy. We went to all those teacher meetings where we discussed how to establish and maintain discipline in class. Still, the theory is often too broad that we cannot apply it in the classroom to every student.

The truth is we cannot rely entirely on the theory. Both children and teachers are unique as well as their environment and the current mood. The thing we can do is to try to collect as many experiences as possible from our practice and the stories of our colleagues. In this spirit, I will share with you what happened next.

Let’s get back to Tim. The next day, I spoke to Tim privately as I handed him a string of twenty beads. He looked at them quizzically, wondering what this meant. After all, this was an entirely brand-new procedure that I had implemented that very day. 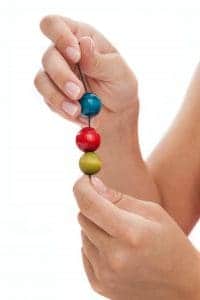 “I want you to hold this string, and every time you interrupt without following the rules, I’ll take away a bead,” I explained to him. “If you lose all the beads, you will not be able to ask your friends or me any questions for the rest of the day. Understood?”

“Yes,” he said as he nodded, feeling the beads with his fingers.

“This will also count as points,” I added. “If you do well, this could turn into monkey dollars.”

He sharply swallowed, taking in all the information; he knew what the stakes were now, and it was up to him to do well. Sending him back to his seat,

Everything was going fine, but when we started group work, it was only five minutes before Tim was speaking loudly over me, interrupting class time and distracting his peers.

I glanced at him, holding out my hand, patiently asking for a bead that he gave up unenthusiastically. He sat back down, silently. Though, he would start talking again within a few minutes. Each time he did so, I took another bead. By recess, he had gone through fifteen beads. I warned him, once again, before he went out for a break.

I’ve only got five left

As recess was over and the class began seating themselves, I saw Tim looking down at his beads, counting them one by one. The realisation had dawned over his face that he only had five beads left and what that would mean if he lost them.

The next lesson began, and as I was teaching the whole class, Tim began to talk. Without a word, I extended my hand for a bead which meant he was down to four. Resuming my talk, I could see Tim fighting the urge to interrupt me.

Throughout the lesson, Tim rubbed the beads with his index finger and thumb as a reminder of what would happen if he lost all of them. It was as if he was contemplating whether speaking without raising his hand was worth losing his opportunities to talk later. Or, if it were worth losing any potential monkey dollars that he could earn.

I was amazed by how simple, yet effective this classroom management strategy had been. It changed Tim’s off-task behaviour into more appropriate classroom etiquette. Over time, I began to see a significant improvement in his behaviour. He no longer acted out or spoke out of turn.

Eventually, Tim and I decided on starting each day with only five beads instead of twenty. It was indeed a relief when we began using fewer beads because it meant that this strategy was working.

Many times we do not know why a particular strategy gives results, but the important thing is that we are trying and paying attention. Paying attention besides patience is probably the most crucial thing in our work with students.

Do you have a favourite classroom management strategy that’s simple but works like magic? Do share below in the comments.

Quiz: Is Your Work-Life Balance At It’s Best?

How to teach online and secure work-life balance

sylvias Visit My Stall
I am a K-12 Australian Teacher, with 25+ years of teaching experience. My Honours research investigated how teachers succeed in teaching English in a TEFL context. Originally from the UK, I lived and worked for 15 years in the Pacific Islands. During that time I was Principal of a school for 5 years, training teachers, teaching a class, and building a school from the ground up. I'm now back in Australia teaching and having fun!
In 10 weeks learn how to work only your school contracted hours, and stop taking work home.
Tell Me More!